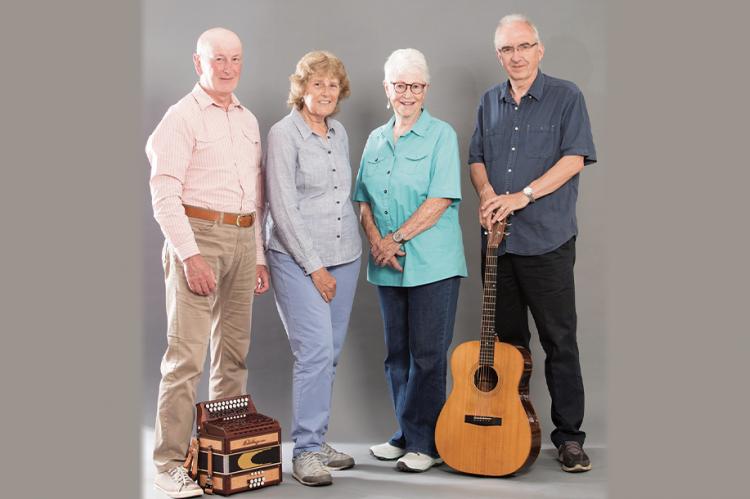 The Gilchrist Collective
Most truly yours, Aunt Anne …telling the story of important song collector, Anne Gilchrist
by Sue Burgess

Born and bred in Lancashire, Peter Snape has always taken a particular interest in the folk music of that county, and the popular duo in which he accompanies his wife Barbara's singing on an array of melodeons, always includes many Lancastrian songs. As one of the first areas in England to be heavily changed by the industrial revolution, Peter and Barbara researched and developed a presentation called Cotton Town Chronicles, illustrating life in the days when cotton and coal were king. But the two of them always thought that there was more to be found, and that the traditional music of Lancashire deserved greater recognition. Whilst in the early 1900s collectors were finding wonderful sources of song in other counties, there seemed to be something of a gap in North West representation.

They already had some knowledge of folk song collector and tune expert Anne Gilchrist and knew she was born in Manchester. But it was after Martin Graebe, author of books on West Country collectors Sabine Baring-Gould and Alfred Williams, gave Peter a nudge, that they embarked on their research and resulting project about Anne.

Enthusiasm for the project grew quickly, as friends and other performers were invited to broaden the song repertoire. The talented violinist Poppy Weatherall (guest musician on one of the Snapes’ CDs) assisted in the initial phase of researching the Gilchrist manuscripts. Vocalist Sue Burgess (long-time harmony and solo singer) added variety to the chosen song interpretations, and the range of sounds was increased further by Brian Peters, bringing his distinctive voice and multi-instrumental skills to the mix. Brian, another North West musician with an interest in local material, had long felt that Anne Gilchrist would be an interesting subject for a project.

The resulting collaboration is a band called The Gilchrist Collective, which has recorded a CD of songs Anne collected and developed a multi-media show including slides and readings, which made its debut at Tenterden Folk Festival in 2021.

Anne Geddes Gilchrist was born in Manchester in 1863 and spent much of her long life dedicated to collecting and studying folk music, specialising in songs and tunes, the majority of which came from her native county of Lancashire. After first studying Baring-Gould’s collection, then meeting the Yorkshire song collector Frank Kidson, Anne joined the Folk Song Society in 1905 and was on its editorial board by 1906. She served in that capacity for nearly 50 years, becoming an acknowledged expert and writing over 40 scholarly articles for publication in the society’s Journal. Her collection of folk songs from the North West and Lancashire is particularly significant, for at a time when almost all the folk song collectors were scouring the Southern counties, she and Frank Kidson were the only ones interested in the North, and it was Anne alone who concentrated on the North West.

Her collecting activities did not follow a systematic course, but between 1898 and 1909 she amassed a considerable number of ballads, carols, street cries, nursery songs, singing games, hymns and dance tunes. In 1948 she received an OBE for services to folk music and in 1938 she was awarded the Gold Badge of the English Folk Dance & Song Society, who also dedicated its 1951 Journal to her as “a tribute to Anne Geddes Gilchrist”.

When the Penguin Book Of English Folk Songs was published in 1959, it contained six songs collected by Anne Gilchrist - and those of us singers who regularly thumbed through its pages will remember those A.G.G. initials next to some pieces which became classics of the 1960s/70s folk club repertoire. How often did we hear Rounding The Horn (aka The Gallant Frigate Amphitrite) or The Greenland Whale Fishery in those days? Well, Anne got these songs and many more (such as The Golden Vanity and Admiral Benbow) from William Bolton, a retired seaman living in Southport, whose tiny shop was an easy walk from Anne’s home at the time. His shanties and sea songs were the first of their kind to be published in the Folk Song Journal, as a direct result of Anne’s work.

In 1907, when visiting her brother William in Sussex, Anne managed to acquire some excellent songs from the locals in Blackham, including Gentleman Soldier from Mr Coomber and Mother, Mother, Make My Bed from Mrs Ford, the blacksmith’s wife. Both songs were published in the Penguin Book Of English Folk Songs. Mr Ford, the blacksmith, also gave her an interesting version of the ballad, Barbara Ellen.

By 1914, various members of the Gilchrist family had moved to Sunderland Point, near Lancaster, and family descendants still live there today. With her sister Helen, Anne bought a property nearby and lived there until her death in 1954. During her time in this area, Anne collected songs from the inhabitants of Sunderland Point, including versions of Brennan On The Moor from Mr Whitehead and Brian O’Lynn from Mrs Edmondson. She also acquired a couple of unusual pace-egging songs from The Jolly Boys of Overton, a nearby village. The Little Gypsy Girl and The Undaunted Female came from Mrs Bowker, whose son William became a chauffeur to the Gilchrist sisters.

In 1909 she visited the small villages of Barbon and Casterton, in those days part of Westmorland, but now in Cumbria. Here she found yet more singers with excellent songs, including The Fall Of The Leaf from James Bayliff and The Green Bed from Agnes Collinson, wife of blacksmith John Collinson.

Anne’s expertise became acknowledged over many decades, as she was an excellent correspondent and unstinting mentor to anyone who sought her help. Indeed, so helpful was she to so many people that she became addressed - and signed herself - as ‘Aunt Anne’. But, perhaps because she did not publish any books, she became something of a neglected figure; until now, that is, because Peter Snape has written a book about her!

The soon to be published book complements both the CD and the show, and illustrates Anne Gilchrist’s great importance to the world of folk music, with interesting photographs and examples of the songs she preserved. Using Anne’s own words when acknowledging the tribute given to her in the 1951 Journal of the English Folk Dance and Song Society, the book is entitled Most Truly Yours, Aunt Anne.

The Gilchrist Collective's new CD is called simply, Most Truly Yours. The Collective was born out of a desire to celebrate Anne Gilchrist’s contribution to folk music and give prominence to the folk songs she collected. Hopefully, this will ensure that Anne Geddes Gilchrist will rightly become recognised as one of the most significant figures in the folk music world of the early 20th century.

The CD, Most Truly Yours, by The Gilchrist Collective (supported by the Sarah Morgan Foundation - www.sarahmorganfoundation.org) is released on 11th April and may be obtained directly from www.thesnapes.org.uk

Further information about book, CD and show may be obtained from Peter Snape via 07831 311028 or peter@thesnapes.org.uk.

Buy the printed version of this issue from our online shop