The GFRS story begins in 1968 in a dwelling in Strathkinnes, a cottage known as The Poffle. It was, at the time, rented by Jimmy Hutchison and Noel Farrow. While they were residents there the cottage became a regular venue for the post-St Andrews Folk Club gatherings. At one of these, Davey Stewart mentioned something he had come across. It was a group of people who were travelling around in what was referred to as a ‘Folk Charabanc’, taking a folksong-based performance to far-flung places. This conversation sowed a seed until a time was right. 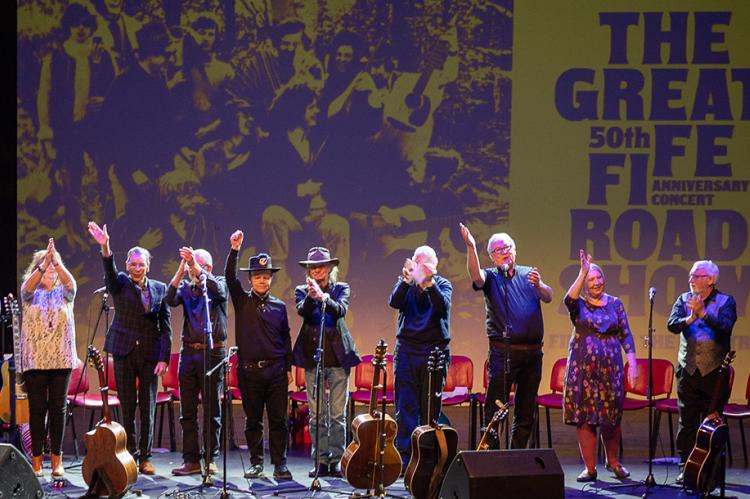 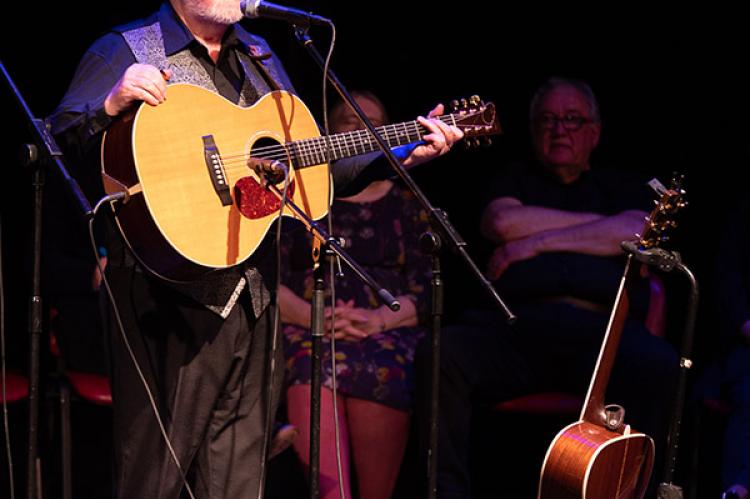 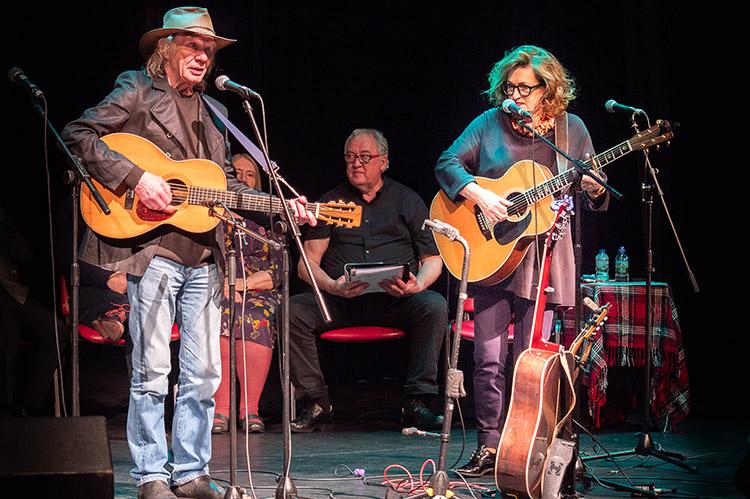 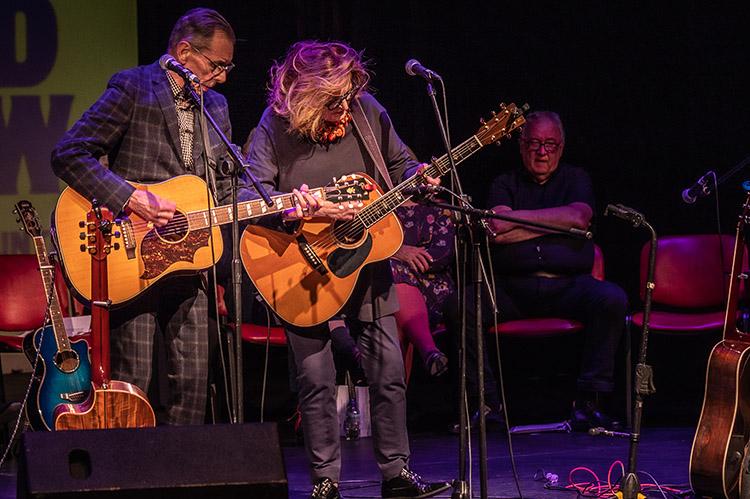 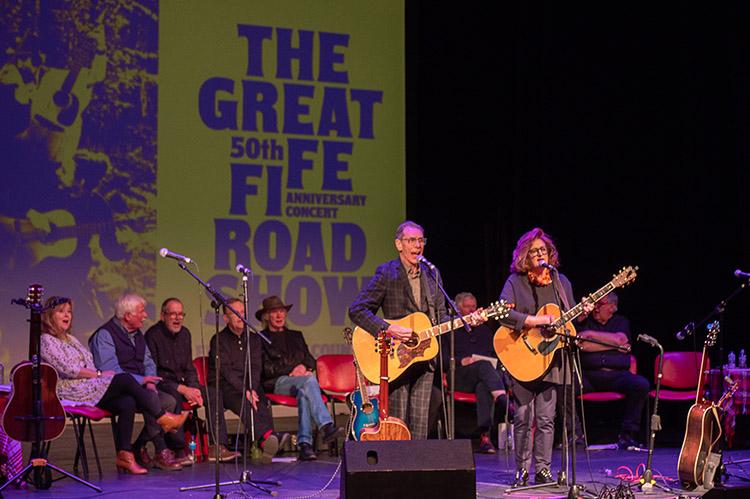 The GFRS story begins in 1968 in a dwelling in Strathkinnes, a cottage known as The Poffle. It was, at the time, rented by Jimmy Hutchison and Noel Farrow. While they were residents there the cottage became a regular venue for the post-St Andrews Folk Club gatherings. At one of these, Davey Stewart mentioned something he had come across. It was a group of people who were travelling around in what was referred to as a ‘Folk Charabanc’, taking a folksong-based performance to far-flung places. This conversation sowed a seed until a time was right.

It was October 1969 until the idea became a bit more real. Davey Stewart was, at the time, at Strathclyde University. He had made pals with students from other Unis, including Queens in Belfast. Fergus Woods and Tom Hickland shared Davey’s fondness for folksong and folksingers. They asked if Davey could arrange for Auld Davie Stewart (aka The Galoot) to come to Queens to perform and suggested he build a show around it. And so that transpired. Auld Davie, Artie Trezise, Barbara Dickson, Davey Stewart, Davie Craig, Jimmy Hutchison and Rab Noakes all made the trip by train to Stranraer and took the ferry to Larne. Although the name Great Fife Road Show had yet to emerge this does qualify as the first outing featuring its members in such a performance.

Following this, John Watt became involved and things immediately became better organised. There is no doubt that John, an energetic creative force, breathed life into this outfit. A tour of East Anglia was arranged for December. Jim Knox kindly agreed to drive the group in his Bedford CA, laid out mini-bus fashion. He and his girlfriend Sheila, along with Cathy Watt, sat up front. The rest, largely behaving badly, occupied the back.

The next event was the group’s tour across the summer of 1970. This was a major undertaking which totalled over 20 dates across Scotland. There were hits and not quite misses. Amongst the hits was the fact that Ullapool had sold out and an early show was hastily organised to capitalise on this fact. In Dingwall the group nearly pulled it, before they found that a bus-trip was on its way and coming to see them.

At the end of this tour, something had been created that would go on to have several lives. Personnel changes, or at least additions, made their appearance. Cilla Fisher, now married to Artie was one, Brian Miller another. Jim Herd moved away, Barbara Dickson and Rab Noakes were making some headway and weren’t so available. There were occasional performances such as an event for a friend, Citty Finlayson. A performance occurred at the Elbow Room Kirkcaldy in 1992 celebrating the 25th anniversary of the hotel’s association with folksong.

The Great Fife roadshow is now legendary in Scottish folk music circles, so it was no surprise to find that the theatre in the Lochgelly Centre in Fife on 18th January 2020 was packed with an enthusiastic audience, including many people who travelled long distances to be there. All the surviving past-members were taking part, and included in the show there would be a tribute to the late, and much-missed, John Watt. This was an evening to be savoured!  A couple of Jan Miller's famous papier mache models adorned the sides of the stage, one being the Keltie Clippie, with its echoes of Barbara Dickson, the other was ‘old’ Davie Stewart, The Galoot.

For Rab Noakes and many of the others, the Roadshow was a stepping-stone to further success. Rab recalls: “It sort of drew a few elements together and from a professional point of view it was an interesting time. We were all learning how to perform on a stage, and we were all getting involved in the production side too, so that gave a wee insight into how all that goes. John Watt was the great driver in all of that. Most of us had been performing in folk clubs, this was expanding into something else.”

The anniversary show turned out to be very special. I'm not sure what people's expectations were, but it is fair to say that they would have been exceeded by some measure. There were many special moments including one which deserves to be highlighted - Cilla Fisher and Artie Trezise singing Generations Of Change. Cilla rarely sings these days, citing overworking her voice during years of performing with The Singing Kettle. It's difficult to overstate the emotion and memories that were evoked among the audience during their performance of that song - a song from their award-winning LP on Topic Records from the 1980s. The audience were with them every step of the way, listening with their minds as well as their ears. Sometime after the concert, my thoughts drifted to the older traditional singers like Davie Stewart, who were inspirational to many young singers who were just discovering their own traditions. At the time, we viewed them as ‘old singers’, who despite ageing voices had qualities that more than made up for any vocal deficiencies. The thought that came to me was that everyone on the stage in Lochgelly that night was older than Davie Stewart ever was, and they were entertaining us royally. Over 500 years of performing expertise was present on the stage that night, and it showed.

The show was a one-off, an anniversary that needed to be marked. Although there were no plans to record the event, an eavesdrop audio recording was made, as well as a single static camera video recording. It's unlikely that there will be any commercial availability of these recordings, but hopefully the performers might agree to them being available online in some form - as a memento of the occasion these would be appreciated by anyone who was at the concert. Sometimes you ‘just have to be there’ to appreciate the magic of a live performance, but this evening was special – a piece of folk music history. Here’s hoping.