Liam Weldon was undoubtedly one of the finest Irish singers of any generation. He was also an outstanding songwriter and a champion of the oppressed, and of the Traveller community in particular, whose influence on his singing stretched back to his Dublin childhood. Unaccountably, his singing never really received the accolades it deserved, and he remains largely forgotten since his death, 25 years ago.

Cathal McConnell with Heather Heywood @ Irvine Folk Club, February 2014 Pete Heywood Wed, 06/03/2020 - 11:04
This is an unedited live recording of a performance by Cathal McConnell and Heather Heywood at Irvine Folk Club. There was no preparation for this concert, no planning beforehand between Heather and Cathal, The idea was that Heather (and Pete) Heywood would act as hosts, and a foil for Cathal, interacting with him as the evening progressed. It was one of the evenings where things worked out, each singer responding to each other - helped by an enthusiastic audience.
Malinky - 20 Years of Malinky 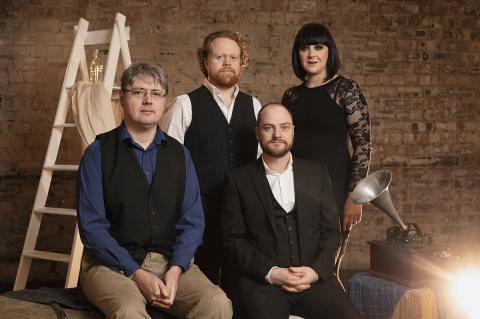 For the last 20 years Scottish folk band, Malinky, has made a name for itself as one of the great champions of traditional Scots song.  As the band prepares to launch its 20th anniversary album, Handsel, I caught up with two of its founder members, Steve Byrne and Mark Dunlop.  They start by telling me a bit about the early days - the line-up back then consisted of Steve, Mark, Karine Polwart and Kit Patterson.  Mark begins: “As I recall, the scene at the time comprised either instrumental bands who did the odd song (e.g. Deaf Shepherd), or purely instrumental acts."

Mairead Ni Mhaonaigh - It's In The Blood Fiona Heywood Tue, 05/30/2017 - 18:45
If there is one person who has brought the traditional music of Donegal onto a world stage in recent years, it is Mairéad Ní Mhaonaigh.  Born and reared in the Gaeltacht area of Gaoth Dobhair (Gweedore) in Donegal, she has travelled the world for over 30 years, bringing along with her a wealth of traditional tunes and songs from her native county, much of which she learned from her own family and neighbours, in particular from her father, the late Francie Ó Maonaigh.
Muireann Nic Amhlaoibh - Closer to Home Fiona Heywood Sat, 04/29/2017 - 18:39
Muireann Nic Amhlaoibh is a singer and flute player immersed in the vibrant traditions of the West Kerry area.  After studying traditional music at UL, she joined Irish band Danú and performed all over the world with them for 13 years.  Since leaving their ranks in 2015 after having two children, life has been somewhat different for Muireann, but it certainly has not been the end of her musical road.  We met up with her to find out more about life after Danú.
Subscribe to Irish Song